Thinking about buying a new TV? Ah, the excitement! Measuring the living room, looking for the right place where it could fit, or choosing the color of the bezel, the right resolution, figuring out the necessary connectivity options and brightness? And if the couch you will be sitting on watching TV has the right viewing distance, because you don’t want to watch a football game without being able to recognize the players, do you? If you are not dealing with decisions like this right now, chances are you did in the past or you are going to do it in the future. Let’s face it, it’s inevitable, just like most things that are coming our way, the future is worth talking about, so let’s focus on this concept of time right now: The Future.

In the not so distant future, you most likely won’t have to deal with decisions like this at all. Not because of the breakthrough in projection technology, not because TV will become obsolete, nor because manufacturers will die out and Apple or Netflix will take over the TV game (well, that is happening anyways); it’s because you will be able to watch TV on a screen any desired size, anywhere and anytime you want – not just on your comfy couch at home. The magic behind that is a thing called augmented (AR) or mixed (MR) or even virtual reality (VR), but only in its final form. The final form of media. The final form of consuming content. The final form of entertainment. The end game.

So let’s focus on the present for a minute: there are a couple of VR devices out there, and most of them are pretty nerdy; you probably heard of names like Oculus Rift, HTC Vive, Playstation VR or Samsung Gear VR. Manufacturers gaining momentum in creating the device to end all other devices – no wonder, since VR hardware is supposed to earn $17.8 billion by 2020. By the way, Samsung has sold more VR headsets in 2016 than Oculus, HTC and Playstation combined, namely 4.51 million pieces. And a lot has already been achieved with them: High resolution: check. Variety of content: check. Availability of devices: check. A cure to motion sickness while using it: check. Even motion, movement and eye tracking has been conquered not so long ago, getting VR one step closer to be a realistic experience in an unrealistic, digital environment. But one crucial thing is still missing, and all of the current solutions are not even close in delivering it: ease of use. A no-fuzz device. A device for people who are not expert gamers or scientists or enthusiasts. Something you can put on your head without having to connect a cord, a battery back or a head strap. Easy as putting on your shades and unlocking your smartphone.

Some manufacturers are still trying to mimic the success story of smartphone development, because it is their field of expertise, and it worked already in the past: increase screen resolution, add a new camera, mix it with a better microprocessor, a newer software version, and a dash of some weird new experiential technology. But baby steps are for babies, in a saturated market walking slow is not an option anymore: we don’t need another device that’s slightly faster and better looking than the other one. We need a breakthrough. We need something to control our movements in a virtual world, that feels like the real world. We need a way to trick our brain into thinking we really are standing next to a lava stream or inside an imperial hangar from Star Wars, awaiting the devastating blow out of the Death Star’s Superlaser instead of knowing all the way that it’s all just a game.

So back to our initial question, adding some more amazing stuff: You want to turn your living room into a dark dungeon to hunt zombies? You got it. You want to measure your new fridge and see if it fits in this impossible slot in your kitchen? Done. You want to have a look at the interior of your new car in life-size, standing in the middle of your bedroom? Sure thing. Or you just want to watch the final episode of your favorite TV show in your garden, on a huge canvas, and next to it keep track of a hockey playoff game that happens to run at the same time, on a smaller screen – and all of this together with your friends? Yes. That is the future I’m talking about. And the end or at least a fundamental change in the field of consumer electronics.

If the rumors are true, the first company to deliver something like this is called Magic Leap. Quote: “This technology could affect every business that uses screens or computers and many that don’t. It could kill the $120 billion market for flat-panel displays and shake the $1 trillion global consumer-electronics business to its core.” Says David Erwalt from Forbes Magazine. And he is right: if this thing kicks off and has finally a release date and price, it will change everything we know about consuming digital media in an instant. So maybe you should hold off on that purchase of a new TV set for now. The future is just a (magic) leap away.

Digital Creation: The art of concentration or the return of pragmatism

Six tips for storytelling with 360° filming 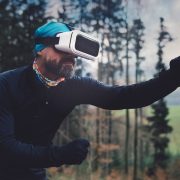 The most relevant SEO News for September 2017
Scroll to top