Alongside the Super Bowl, FIFA’s football World Cup is one of the world’s largest commercialised sporting events. Considering the enormous sponsoring costs, before the competition FACIT Research used a representative sample from an online study to investigate the impact of the official sponsors compared to ‘ambushers’ and competitor brands (non-sponsors).

Companies spend millions in order to be allowed to advertise as World Cup sponsors. According to Statista, the additional advertising costs of the World Cup alone totalled 2.4 billion dollars worldwide this year – not including official sponsorship activity. Shortly before the start of this, the world’s largest football event, Facit Research investigated whether the German public were actually aware of the sponsors.

As well as asking about the actual sponsors of the FIFA football World Cup in Russia, a few non-sponsors were also included. Of all the sponsors, only Coca Cola (67.9%) and adidas (57.8%) were identified as sponsors by over half of those surveyed. The credit card provider Visa is currently recognised as an official sponsor by only 37.3 per cent of participants. MasterCard, as a direct competitor, achieves 34.6 per cent as a non-sponsor, which can be explained by MasterCard’s engagement with the UEFA Champions League. There is an even more extreme discrepancy in public profile between Qatar Airways and Lufthansa and between Budweiser and Heineken. Here, non-sponsors Lufthansa (22.9%) and Heineken (16.8%) achieved higher ratings than the actual sponsors Qatar Airways (17.1%) and Budweiser (13.4%). Why is this? For Heineken/Budweiser, it is the same story as with Visa/MasterCard: Heineken sponsors the UEFA Champions League and is therefore recognised as a sponsor in the world of football and is now perceived more strongly at the World Cup than its competitor Budweiser. And from a German point of view, the Lufthansa/Qatar result has an easy explanation: as the airline and its crane logo sponsor the German side, its visibility in connection with the football World Cup is huge in this country. As a result, many of those surveyed assumed that they were sponsoring the entire World Cup.

This shows that the real sponsors of the FIFA football World Cup were not able to achieve the desired link with the event in advance. We will run a second survey after the event and are excited to see any changes in the assessment. 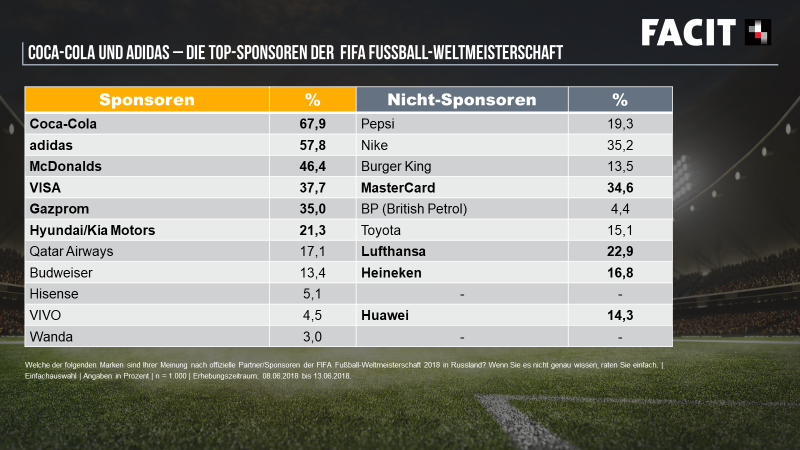 So, what does an Account Manager Social Advertising do?

The inside story x 3: What can blockchain do for us?
Scroll to top