In the last couple of years, entrepreneurs across the Middle East have launched new products, businesses, and have shown the possibility of creating a vibrant startup scene similar to Europe and the United States.

Startups from the region have shown great promise. An example for this is the recent acquisition of Souq, an e-commerce player that got acquired by Amazon for close to $800 million. Another notable exit from this region is Talabat which was acquired by Delivery Hero based out of Germany.

According to a report published by MAGNiTT, a research agency, more than $870 million were invested in Middle Eastern startups last year and each company raised more than $500k individually.

E-commerce, however, is a crucial domain in which startups can do much more to fill the gap in the market, so let’s take a closer look at this vital industry.

Present and future of e-commerce

According to a report published by BMI Research, the Middle East is one of the fastest growing e-commerce markets in the world. The same report also projects that the sales volume of this region will expand to $4.3 billion in 2020 from $22.3bn in 2016.

Out of that sales volume, $19.8 billion will originate from the United Arab Emirates (UAE) as currently close to 88% of UAE’s population are internet users with a smartphone penetration of 78%.

But when looking at the current state of the market, Gartner reported that only 15% of the businesses in the region have an online presence and 90% of online shopping import products from outside the region. These statistics clearly show the tremendous opportunities that lie ahead for the online retailers.

Across the region, men are more likely to shop online than women. For instance, in the UAE 59% of online shoppers are male, while Egypt shows the biggest disparity – with 77% of shoppers being male.

Younger web users are contributing to the drive of the e-commerce market too. In all the markets analysed, 26-35 year olds are more likely to make purchases online than any other age group.

As for products bought, air tickets, electronics and fashion items are the most popular goods purchased online by shoppers in the Arab World.

E-commerce is getting social

The leading way for e-commerce brands is to connect with shoppers across the Arab region via search engine optimisation and social media.

Facebook is the leading social channel among Arab online retail brands, with 41% using the service. Instagram is also proving to be popular – with 23% of these companies making use of the photo sharing app.

It’s good to see an increasing in-depth coverage of the digital market(s) in the Middle East. E-commerce growth has certainly seen an impressive growth.

For those looking to connect with online shoppers across the Arab World, brands need to be aware of the comparatively acute demographics currently making purchases online at the moment – i.e. men aged 26-35 – and trying to understand what makes other web users to try online shopping.

Access may be an issue for certain consumers. And we can also see that certain product types may be better offered through online channels than others.

Social and SEO are seemingly proving to be increasingly vital for e-commerce companies to reach more and more customers, so it will be interesting to see how digital shopping continues to evolve in terms of a search tool, and seeing an increasing adoption in social and more mobile technologies over the coming years.

Although the prospect for the e-commerce market in the Middle East is huge, there are many obstacles restricting the progress. Here are some of the key issues:

There are high trade barriers in the region which makes it difficult for online retailers to ship products. Moving goods through customs can trap any company in a bureaucratic nightmare — especially when you add high tariffs, changing regulations and volatile currency exchange rates. Amazon’s Souq, which delivers products primarily to the six countries in the GCC customs union, is an exception.

Most startups would probably fail if being faced with the adverse conditions in the Middle East. In Egypt, for example, there are no bankruptcy laws. That means an entrepreneur could end up being jailed if debts are not cleared on time.

Simply closing a company to start a new business can also prove to be extremely problematic. Endless amounts of regulatory paperwork is involved and it can take up to 5-10 years. According to World Bank, the average ranking for starting a business in the Middle East stands at 117, which is far below the rankings of the US and the UK. So it’s safe to say that there are still quite a few hurdles in the way for Middle Eastern startups.

Usually, startups attract new talent by offering employee stock options. This is true for most of the world but it’s an alien concept in the Middle East as businesses are forced to operate with outdated legal and regulatory systems.

Labor laws also make it difficult to fire employees, especially when it comes to foreigners, while the existing education system in the region fails to provide locals with crucial technical skills, such as coding.

Amazon’s customer-centric approach and the mission to provide the widest range of products at the lowest price possible makes it an intimidating competitor of any local player.

If the industry is supposed to succeed, the governments in the region will have to play a crucial role in promoting e-commerce, in addition to the efforts of private companies. One of the major ways to build trust can be enhancing e-governance and digital services.

Most of the countries need to integrate the traditional offline services such as visa programs, transportation services, utility services and more online platforms that can leverage online payment gateways to provide efficient services to the local population. In fact, other countries can get inspired by the UAE which has established the world’s first purpose-built duty free retail hub — ‘Matajircom’. There should be concrete efforts from the government to work in conjunction with the regional and international firms to boost e-commerce in the Middle East, so that they can keep up with the rest of the world.

Despite the problems that startups in the region face, many have managed to beat the odds and reach notable success. One of the most prominent startups in the Middle East is Wadi.com, an Amazon-like e-commerce store that raised $67 million in a Series A round with an undisclosed valuation.

Contrary to Amazon, Wadi sources products from a diverse set of retailers and sellers (without maintaining warehouses) and operates online in the UAE and Saudi Arabia. This helps them to deliver products at a much faster speed than Amazon and staying ahead of the international giant.

Mumzworld.com is another notable e-commerce store that’s targeted towards mothers and baby products. The startup secured multi-million dollars in a Series B funding round from Wamda Capital, twofour54, and Endeavor Catalyst.

Souq.com, which was acquired by Amazon, has established its business throughout the GCC and Egypt and currently commands the largest market share with more than 23 million monthly visitors.

Other e-commerce players that have a strong ground in this region are Aido.com, Awok.com, and Zappos clone Namshi.com. Another popular e-commerce store is Cobone.com which is centered around daily deals.

The future holds a lot for the e-commerce players in the Middle East and it’s definitely great to see companies succeed in spite of the intrinsic barriers. Their success is inspiring for other players to build great products and services apart from building trust in the local community.

Economic reforms, diversification and improvement in labor laws coupled with steady growth in internet penetration will propel the e-commerce market to new heights in the next decade. This can also be seen from the chart below. 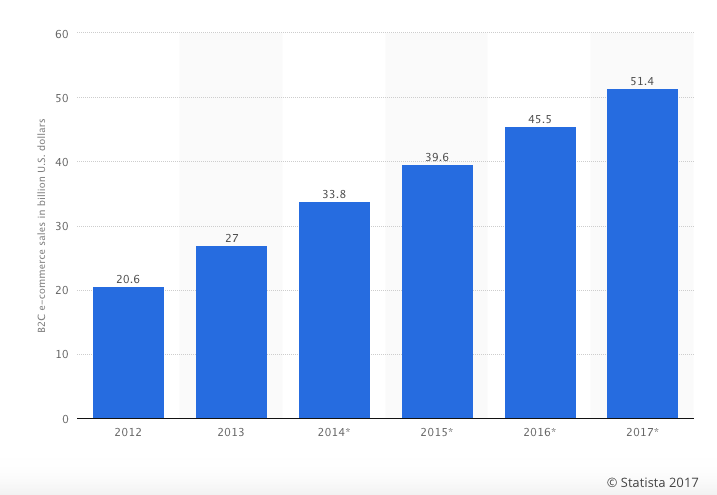 Amamzon: The Rise of the Marketplaces: What's in Store for Retailers

Streamlined Mega - Apps and what brands can learn from them

Rimowa gets a new visual identity

Street-Art: The Art of Change
Scroll to top