Anna Gauto, editor at “forum Nachhaltig Wirtschaften”, spoke to Pavan Sukhdev and Florian Haller on advertising and sustainability. Pavan Sukhdev is a former manager at Deutsche Bank and founder of the “Corporation 2020” sustainability campaign. Florian Haller is CEO of the largest independent advertising agency in Europe, the Serviceplan Group. Both will speak at SusCon 2012 in Bonn.

Anna Gauto: Advertising does whatever you ask of it. Is advertising blameless?
Florian Haller: Advertising is not blameless. It is responsible for how a brand is perceived. Our task is to support and guide it with this in mind. For this reason, advertising cannot be blameless.
Pavan Sukhdev: Advertising is certainly not blameless. Advertisers like to think of themselves as experts, who cater only to the needs of their clients. In order to break through the system of reckless consumption, however, both advertising agencies and the companies they represent must consider the message they are sending out.

Today, companies are effectively adopting the concept of sustainability for advertising purposes. How has sustainability become a sign of a company’s prestige?
Haller: The trend towards a sustainable way of living comes from people, not companies. Well-managed brands are using this desire for sustainability as a business opportunity.
Sukhdev: We have numerous hard-working writers, scientists, entrepreneurs and citizens to thank for the fact that environmental issues have become so prevalent. How the term sustainability has become so popular, however, is a mystery to me. It is often used incorrectly. It actually describes activities which have been practised for centuries. Companies must be able to account for any claim to being sustainable. This is why the standardisation and regulation of ratings, rankings and seals of quality is necessary.

Cigarette advertising shows that selling well does not automatically mean selling something good. Does advertising need a conscience?
Haller: Advertising per se is an instrument which can be used in many different ways. For this reason, advertising as such is neither moral nor immoral. Advertising is, however, a powerful instrument, which can be used to turn a moral concept into a business opportunity.
Sukhdev: Advertising does need a conscience, but we shouldn’t leave it to the industry alone to develop it. We need to ask ourselves which advertising techniques are excessively misleading and what sort of information should be included on product packaging.

There is an increasing demand for ecological products. Has consumer behaviour changed advertising or is it the other way round – has advertising influenced consumers?
Haller: I don’t think we can overestimate the influence of advertising. The need for sustainability has been shaped by reports on climate change and wildlife conservation as well as numerous food scandals. For two years we have been using the Sustainability Image Score to investigate which companies in Germany are perceived as sustainable. This allows us to determine how the public perception of a company’s sustainability affects its brand value and therefore its corporate success. One important finding is that companies should not only use the opportunity to put sustainability into practice, but to discuss it intensively and professionally, at the same time winning over consumers. They must practise what they preach.
Sukhdev: When it comes to the ever more popular topic of sustainability, consumers have far more influence over advertising than the other way round. One should encourage the other.

“Greenwashing” is to give the impression of an ecological sense of responsibility in order to win new customers. Should greenwashing be regulated or prohibited?
Haller: Advertising needs to be authentic, otherwise it doesn’t work. This is linked, among other things, to the considerable influence of the Internet. In today’s world of media, any false advertising quickly becomes apparent in the sensitive field of sustainability – something which can have serious consequences. In Germany, at least, there is a competition law which regulates unfair competition by prohibiting dishonest statements. I don’t think that we need any more regulation.
Sukhdev:  Greenwashing most certainly requires regulation. This isn’t always that easy, however, as it’s not always clear when greenwashing is taking place. Advertising agencies should always have a “No greenwashing” policy – and some agencies do already. Companies should be legally obliged to back up their advertising messages.

An accusation of greenwashing can cause companies which really do want to trade sustainably to fall silent. Particularly when they are just starting to invest in sustainability, not every process will have been perfected. How can we prevent this dynamic?
Haller: On the one hand, by not perceiving advertising as the work of the devil, but rather as a legitimate and powerful instrument which can be used to raise public awareness of issues such as sustainability. On the other hand, by continuing to underline the fact that greenwashing is not an intelligent communication strategy.
Sukhdev: By standardising ratings and certificates. The voices of good companies must be heard above the noise. They must be recognised for their innovative and responsible approach.

In 1990, tobacco advertising was banned in New Zealand. As a result, sales dropped by 7.5%. Is this proof of the effectiveness of a ban?
Haller: I know of other figures which prove the opposite. It is wise not to trust any statistics which you haven’t verified yourself.
Sukhdev: The results of regulation will be different from country to country. But this example certainly shows that regulation can immediately make itself felt in a positive way. Tobacco consumption involves considerable healthcare costs, which are often paid for by the taxpayer. So the regulation of products such as tobacco in no way restricts the freedom of individuals. Regulation is rather an instrument which allows governments to reduce the negative consequences for society as a whole.

In 2007, Sao Paulo banned advertising in its cityscape in order to combat “visual pollution”. Is a metropolis without illuminated signs and placards a model for the rest of the world or is it a case of state paternalism?
Haller: I think a world without advertising would be a duller and sadder place. You only need to walk through the centre of Minsk and you’ll see what I mean.
Sukhdev: The case of Sao Paulo is very interesting. Practically all forms of outdoor advertising are banned there. Even the head of one of the largest advertising agencies agreed with the ban. He could see that it was better to develop new advertising strategies than to cover the town in trashy illuminations.

Advertising turns desires into needs – do you agree?
Haller: If you mean that advertising subliminally drives people to believe that they have uncontrollable, fictitious needs, then no, I don’t agree. We recognise the needs of people and fulfil them. These needs usually have an emotional, rather than a rational, nature. That’s what people are like.
Sukhdev: Advertising takes advantage of people’s uncertainty. It manipulates their anxieties, desires and the social pressure they are feeling and tells them that they want a particular product. Sometimes adverts go even further and convince people that they actually need a product. The people themselves are unaware of how irrational these supposed needs are. The fact that this drives consumption and economic growth, however, means that neither companies nor governments are complaining. It’s clear that this system is not sustainable.

According to Jochen Zeitz, former CEO of PUMA, it is the responsibility of companies to steer consumerism in the direction of sustainability. Ultimately, it was companies who invented consumerism. Is that true?
Haller: Yes.
Sukhdev: It lies in the hands of companies, consumers, governments and civil society. But companies are the driving force behind the current unsustainable economic system. They therefore have a huge responsibility to manufacture better products, advertise them responsibly and encourage consumers to make the right choice.

Large companies pay huge sums for advertising and publicity. Is this money well spent?
Haller: A sustainability strategy which is not communicated to the public will fizzle out. I believe that sustainability is only sustainable if it is understood as a business opportunity rather than patronage.
Sukhdev: In terms of profit maximisation that is certainly the case. Companies clearly believe that advertising is a good investment – otherwise they wouldn’t spend money on it. But many companies don’t really know how successful their campaigns are, because the evaluation of advertising effectiveness is still in its infancy. From a social standpoint, advertising harms consumers in various ways, and this is something for which very few companies take responsibility.

Why we urgently need better ways to advertise online 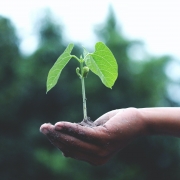 Our culture: An insider’s view

On the road #2: Dubai
Scroll to top